We all know it. Even if you’ve never used it, you know it. Swipe left for no. Swipe right for yes. Ding! You have a match. Your brain releases hormones that make you feel good. Now you’re able to chat. Who is it? You want to have a good opening line, don’t you? If you’re lucky, things progress, you hook up and chances are it’s all pretty meaningless. You’re back to swiping, texting, and fucking all over again. Such is the way of this app and why Tinder destroyed dating.

Is this love in the twenty-first century? Or is it simply the logical conclusion of when technology and sexual gratification intersect?

If all you want to do is get laid, yes, a hook-up app can do that. I’m not going to say I have a way to right this cultural trajectory, but I will offer a silver lining. In the land of the blind, the one-eyed man is king. So too in the land of digital seduction, the man with the ability to connect face-to-face, you know, the way our species always has, may have an unexpected edge. After we take a look at how truly horrible Tinder is, I will argue that it’s still vitally important to be a confident man with the ability to approach a woman and make a real connection. If anything, it’s far more important now than ever. Perhaps the more we lose our ability to connect face-to-face, the less human we actually become.

For those who somehow don’t already know, it’s a hook-up app on your phone that will show you profiles of people in your area. You are able to select people you find attractive, and if they find you attractive, you’ve “yepped” or matched, and you’re then able to text back and forth with each other, hopefully arranging plans to meet up and eventually bang.

Aside from the same old criticisms of “it’s shallow sexual encounters” or “it’s base gratification” or “just an endless fuck-pit”, and aside from the common Tinder pitfalls of crazy fucking messages and people who look nothing like their profile pics, what else is Tinder?

It’s code and brand and images, all stored on its servers, perhaps even images of you and your penis, are all property. Tinder is owned by Match Group, which also owns Plenty of Fish, Okcupid, and, of course, Match.com.

No, I don’t mean that. Because the controlling shares in Match Group are owned by a holding company called IAC or InterActiveCorp. They make billions a year. Funnily enough, actually finding a good relationship means you’ll stop using these sites. There is a perverse incentive at play in their business, and it’s not about making you happy and fulfilled as a human being.

This concludes our friendly reminder that sites and apps like Tinder are data mining you, just like all the others. Tinder is free (at least at first) because they’re able to make money off of you. 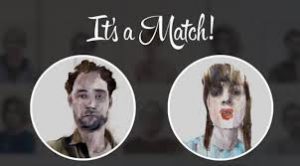 Why Tinder Sucks, and why it destroyed dating

There are three main reasons why Tinder is so toxic to dating and they all have to do with one common theme, the lack of human connection. They are: 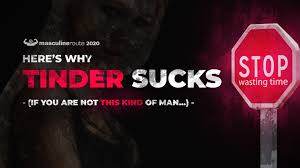 You may have read somewhere that most communication is nonverbal. Here’s exactly how much is not just words: 93% When you’re just texting someone, you’re missing out on 93% of the story.

Eye-contact, tone of voice, facial expressions – those are all missing in “U up?”

The point here is that Tinder has offloaded the initial stages of meeting someone – making a connection, an attraction – and placed it in a medium that ignores almost all of the way we naturally communicate. It’s two-dimensional at best. Sure, there’s a lot you can do with the power of the written word, but it can be done much faster and deeper with a glance and a smile. 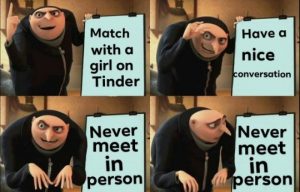 As psychologist Barry Schwartz put it in his book, The Paradox of Choice, “Autonomy and freedom of choice are critical to our well being, and the choice is critical to freedom and autonomy. Nonetheless, though [we] have more choice than any group of people ever has before… we don’t seem to be benefiting from it psychologically.”

In the case of Tinder, part of the problem leads to a ratcheting up of physical standards, when all you’re basing your decisions on is pictures. Given a wide pool of profiles, there just seems to be so much out there. Why waste time on the uggos?

In order to stand out, you need a strategy to attract. As Chaim Kuhnreich, a Ph.D. Candidate at Concordia, put it in The Conversation, “Tinder males are likely to signal specific resources or potential for acquiring resources, while women are more likely to signal pro-social behaviors such as benevolence, charitable work or virtue.”

In other words, men say “look how rich I am” and women say, “look how good I am.” Not exactly complete and honest. How are you supposed to connect with someone if you are not even being real?

In the end, it seems you don’t even have to have skills to convince a girl to fuck. With Tinder, it just becomes a numbers game. You may have even seen that viral video from YouTube prank channel Whatever about asking 1000 girls on Tinder if they want to have sex directly with the completely direct and flat, “Hey, do you want to have sex?”

While the reactions are some kind of wonderful, it’s intriguing to see the numbers. Here is a screengrab of results and notes from their highly unscientific – albeit, pretty hilarious – social experiment.

Looking percentage-wise,  2.5% said yes. That sounds small, but that’s still 25 women. With absolutely zero connection! Just a couple of pictures and a bio. For reference, the average number of sexual partners someone has in their lifetime for the United States, is around 7 people. If that math were to remain statistically true, which we obviously can’t say it would, he would only need to match with about 40 girls before one of them would say “yes.” 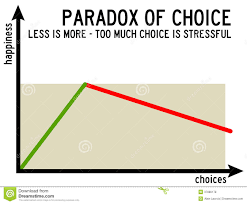 Like all social media platforms, Tinder is engineered to be addictive to you. I emphasize you, because the UX design takes you into account. That’s the age of big data we live in. It’s ever optimizing to “enabling the self-entitled attitudes of men and women alike,” as a Reddit user, a woman going by the name of ‘drunk and broken’, in an epic take-down of the app some years ago. 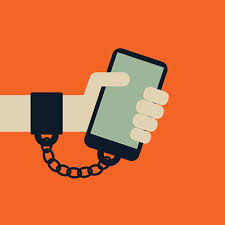 Tinder’s way of being has diminished our ability to connect and made us slaves to the technology, because “everyone’s dating online now.”

I would argue that because everyone is online, the way to stand out is to do the unorthodox, approaching someone and having a conversation. Let the natural attraction form between the two of you, and ask for a number. Besides, texting becomes so much better when you’ve actually talked face-to-face. And whenever you do go on a date, Tinder or otherwise, you’ll still need to make a human connection on some level.

I’ll leave you with some of the wise words from drunkandbroken, which I feel sums this argument up pretty nicely. “I too have fallen into the Tinder trap, which is a social experiment that speaks volumes about what technology and social media has done to our societal norms. I have these ridiculous expectations and requirements about what it takes for a guy to actually meet me, and yet I feel little to no remorse. When I look at relationships that I have had; those guys looked NOTHING like what I suddenly look for in a match, and yet I carry on as if I am holier than thou.”

“I miss the spontaneity of meeting a guy, giving him my number, and looking at my phone every ten minutes hoping that he messaged me.” 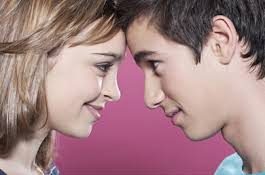